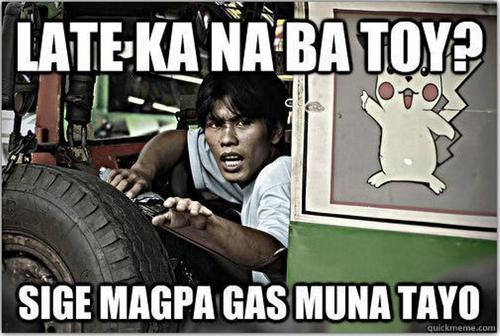 How is life going to your araw? I am hoping that today is maganda for you so you won’t make init ulo. It looks like kasi you are having a pinagdadaanan. Like you know?

Why do you make hinto kasi on every kanto even if there’s walang tao. Duh. The people are still making ligo for their trabaho and your are already making hintay for them in the kanto. My god, imagine how many kantos are there.

You also make galit of the nanay with her anak because she doesn’t make kandong the anak so that other pasaheros can hop in your sasakyan. You even make galit the pasahero for being maarte because they didn’t make sakay because it’s masikip. You make sigaw to them to make para a taxi instead.

The traffic here in the Philippines is heavy also because of the government making hukay the daanan and making aspalto. Yet, you don’t want to make gilid your jeep when a pasahero make para. You are like making harang both the two lane daanan. You do this so that other drivers would not make singit and make agaw passangers ahead. Also, while the matanda is stepping down on your jeepney after she makes para, you already make andar the jeep like you are nagmamadali. It’s a good thing it is not really pansinin. Noting that kanina you make antay matagal now you are like making the pasaheros madali. Shucks! You are making my bangs so sakit even if I’m so kalbo. Gosh.

The next time I make kita of you, I will try not to make sakay on your jeep. You made me late kasi kanina. I hope you make ayos your pinagdadaanan too.

This site uses Akismet to reduce spam. Learn how your comment data is processed.

The adventures of a hypothyroid, nursing student, with a gypsy soul.

Motley Concoctions In A Blank Mind

Procreating art that have affirmative effects on the cosmos...

The Journey of A Lifetime

The passion moves the story...

Lin Against the World
lhizonearth

A millennial's blog on hustle, style, and self

life of a jologs in a sosyal world

Welcome to my blog site!

When photography meets poetry. What a masterpiece.

ONE LIFE, LIVE IT WELL.

Spilling some TLC (Travel, Lifestyle, Culture) with a sprinkle of Personal Development & Finance

let the thing that you're looking for find you.

An Asian Mermaid Lost In Transition

tell yourself to remember
The Grimoire of the Rainbow Mage

Gaming, Thoughts, Anything over the Rainbow

Exploring the Philippines and the world one step at a time

Not my will, but Yours be done

My blog
People I Meet, Places I Go

It's the little things that make life big.